“Community Planning: Integrating Social and Physical Environments” is written by Phil Heywood who teaches at the Queensland University of Technology in Brisbane, Australia. He acknowledges that information technology and the growth of things like social networking have created new forms of community. However, he also asserts that “the importance of local community life has never been greater”.  He argues that the communities in which we live help us to grow up, shape the values that we adhere to, teach us how to negotiate conflicts and live a social life.  It is there that we meet and find ways to deal with strangers or to understand our host community.  The local community, he says, is “the nursery for healthy development”. As riots spread across English cities, it is clear that communities can be a positive or a negative force in these respects.

Governments moving away from communities

One issue that the book highlights is the widening gap between small scale local communities and local government units that represent them.  In search of economies of scale and functional efficiency the government units are getting bigger. Arguably this problem is particularly acute in rural regions, especially where the population numbers are dwindling. Amalgamations of communes into bigger units is the obvious answer, but at what cost to community cohesion?

That said, in big cities the contact between neighbourhoods and their city administration and elected councillors can also be strained. Heywood describes the situation in Brisbane, a city of one million inhabitants. The most local level of representation is the ward, and there are 26 wards in the city.  Thus there are about 40,000 people in each ward.

Therefore, the book points to some ways to improve communication between citizens and their governors.  In New Zealand there is a system of ward community boards. These are elected bodies, but are resourced by local government and have some legally guaranteed rights to be consulted. I said a bit more about them in my recent “World View” blog on www.CliffHague.wordpress.com, which tried to relate Phil Heywood’s book to some changes taking place in the English planning system.

A section of the book that could be of particular interest to IC members is the one that deals with methods of consultation. This lists a number of methods that have proved successful and might be used elsewhere. It includes:

The book outlines other possible approaches. It also points to some of the techniques that can be used. 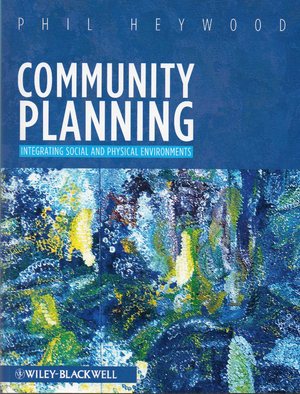 The book also has a chapter on “Places, Spaces and Community Design”, another theme of relevance to partners in the Trans-in-Form project, for example. It highlights the importance of communal spaces. These are the places that people share and where they meet. Heywood says they “accommodate community life”. There is an illustration of good practice in a group of small rural towns in Northern Queensland that is again summarised in my “other” blog.

Although Heywood’s book draws freely on examples for Asia, North America and the UK, as well as Australia, it makes little or no reference to practices in Scandinavia and the other Baltic countries, and is more oriented to what is happening in big cities than to the challenges of small towns and rural regions. Some of the work done by IC partners could provide a useful complementary volume. The book can be purchased at www.eu.wiley.com