LALRG secretary general Mudīte Priede and the chairman of Priekuli Regional Municipality Mara Juzupa told about innovative ideas which help to work more successfully in the municipality. The specialist on Youth Issues of Priekuli Regional Government presented her experience in work with youth which is very important for development of region. Although much is done, new local and international projects have been selected.

Lithuania was represented by the executive in Foreign Affairs in Sauli City Municipality, Žydronė Stanienė, and the adviser in Foreign Affairs in Association of Local Authorities in Lithuania (ALAL), Audronė Aužbikavičiūtė. The experience of Lithuanian representatives about going into international activities was a good example for new ideas in local municipality development.

Estonia was represented by the project manager from Rouge Government, Viivika Nagel. The Rouge Municipality actively and successfully involves youth in their work and also collaborates with local employers who use innovative ideas to work successfully in business - which helps for development of local municipality. 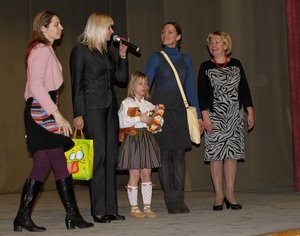 The seminar was attended by 60 people. New ideas were generated, and the participants gained experience of their colleagues which will help in their further work.

The project was financed by European Union Support Programme “Europe for Citizens” 2007-2013.