The leaders and youths are agreed that overall the project managed to create a unique learning environment for young people. The youngest were about 14 years and the older youths about 21years old. This span in age divide wasn´t considered to be a great problem. On the contrary it became a god mix of various ideas and experiences. The youngest ones were perhaps the most motivated and most engaged ones.

The Young Eyes project aimed at making a difference for the hometowns. Through local workshops and elaboration of action plans the project managed to trigger off a range of ideas and suggestions. Also challenges were brought up to politicians. As one young girl expressed it "if the municipality leaders will no lsiten to us then we go somewhere else". The local mayors and other decision makers in Suwalki, Rauna, Jelgega and Robertsfors confirmed that they considered the project very useful and they are all intersted in following up projects and events wher eyouths take an active role.

The project was active at disseminatio. Several TV programs, newspaper reportages and about 100 videos were produced. Some of these can be viewed at the Facebook-group https://www.facebook.com/groups/1558374037748599/

The Innovation Circle Network board and the Young Eyes leaders and expert  team met in Oslo in the middle of August 2016 for summary and closing of the project (Picture).
For the youths this project already came to an end, but for them it´s just the beginning! 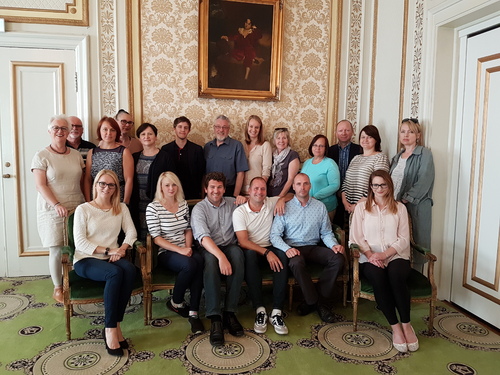